The SUNRISE SpaceFibre routing switches were incorporated in an extensive demonstration system to show various aspects of SpaceFibre. The demonstration system architecture is illustrated in Figure 1 which is based on the on-board data-handling architecture described in Figure 3 and Figure 4. There are two high data rate instruments (Instrument 1 and 2), some SpaceWire based instruments connected via a SpaceWire to SpaceFibre bridge, a pair of SpaceFibre routers (to allow various router capabilities to be explored), a control processor, a mass-memory and a downlink telemetry unit.

The way that these various units have been implemented is illustrated in Figure 2.

The video data from the webcam is routed to one of the SpaceWire ports of the second SUNRISE SpaceFibre router. It then passed through a SpaceWire Brick Mk3 and ends up in a second PC where the video data is displayed. This PC also acts as overall control processor, setting up and monitoring the operation of the SpaceFibre network. Figure 3 shows the set-up during operation. 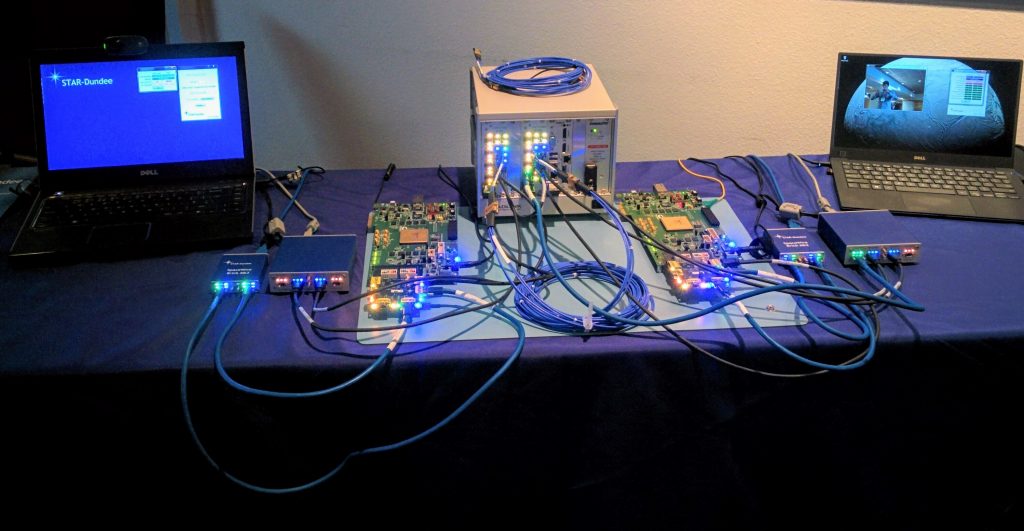 The demonstration system has shown the operation of SpaceFibre in a network architecture representative of a typical spaceflight on-board data-handling architecture. The SpaceFibre links were all operating at 2.5 Gbits/s. SpaceFibre was shown operating and interoperating on Xilinx Spartan 6 FPGAs and Microsemi radiation tolerant RTG4 FPGAs.