The STAR-System software suite has provided the drivers, APIs and applications to our SpaceFibre and SpaceWire products for over 10 years and continues to be updated with new features and improvements in each release. The latest major release, version 5.00, includes two features which we regularly receive requests for: an API for the Python programming language and a new Linux installer supporting ARM targets such as the Raspberry Pi and BeagleBone.

Other new features include a new API to support creation and processing of CCSDS Space Packet Protocol and Transfer Frame packets, and new graphical applications providing RMAP Initiator and Triggering functionality. The Source and Sink graphical applications have been updated to include graphs to visually represent statistics when transmitting and receiving, while there are numerous other improvements and bug fixes.

Version 5.00 has been successfully tested on Windows 11 and Linux kernel compatibility has been tested up to kernel v5.16.9. As with all STAR-System releases, version 5.00 is backwards compatible with previous releases and so any software developed for an earlier version will work with this latest release without requiring any modifications.

STAR-System version 5.00 is now available for download for registered users through the Support area of our website. If you don’t already have access to these downloads, please register your product on our Product Registration page. 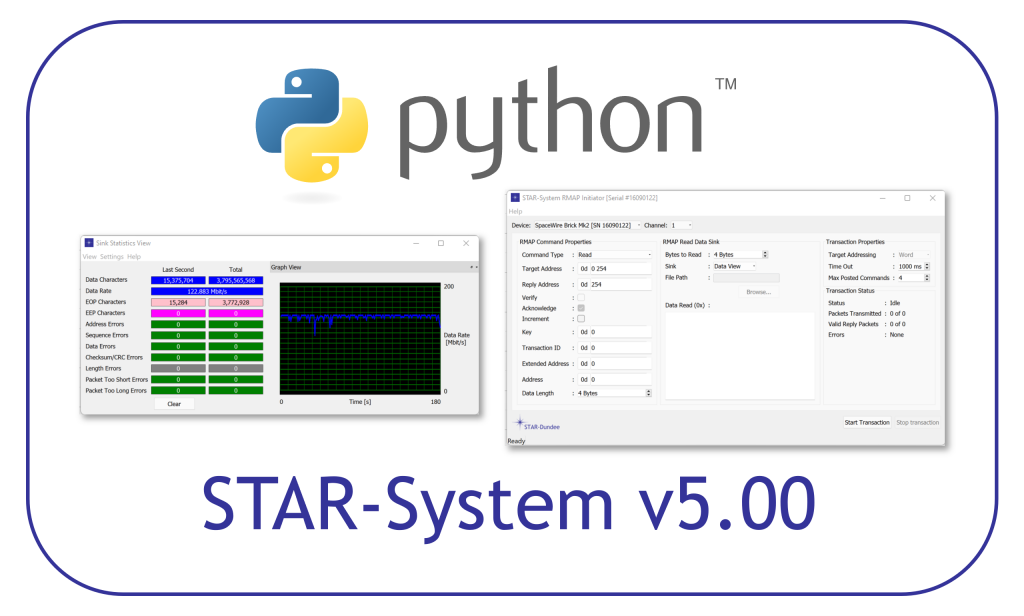 It has been 16 years since the first generation of the SpaceWire-USB Brick was released and the Brick has since become a familiar product in space organisations across the world. Numerous improvements have been made to the product over the years including new features, improved performance and support for new software and operating systems. Many of these improvements have been delivered in the form of software or firmware updates available from our website to existing users.

Sometimes improvements have been made to the physical hardware, requiring a new generation of the product to be released. Five years following the release of the Brick Mk3, we have taken the opportunity to add some new features to the hardware, resulting in the new SpaceWire Brick Mk4. Although the enclosure looks similar to the Brick Mk3, internally the new device features enhanced FMECA protection while the rear panel now includes a grounding stud and a power status LED.

The cable assembly present in previous revisions of the standard has been named Type AL in the new revision of the standard, with the “L” standing for legacy. The inner-shields of Type AL cable assemblies are connected to pin 3 of the connector at the transmit end of the cable only. The SpaceWire Lab Cables we have previously offered as our standard off the shelf cables have conformed to this arrangement.

Type A cables are recommended for all new applications. 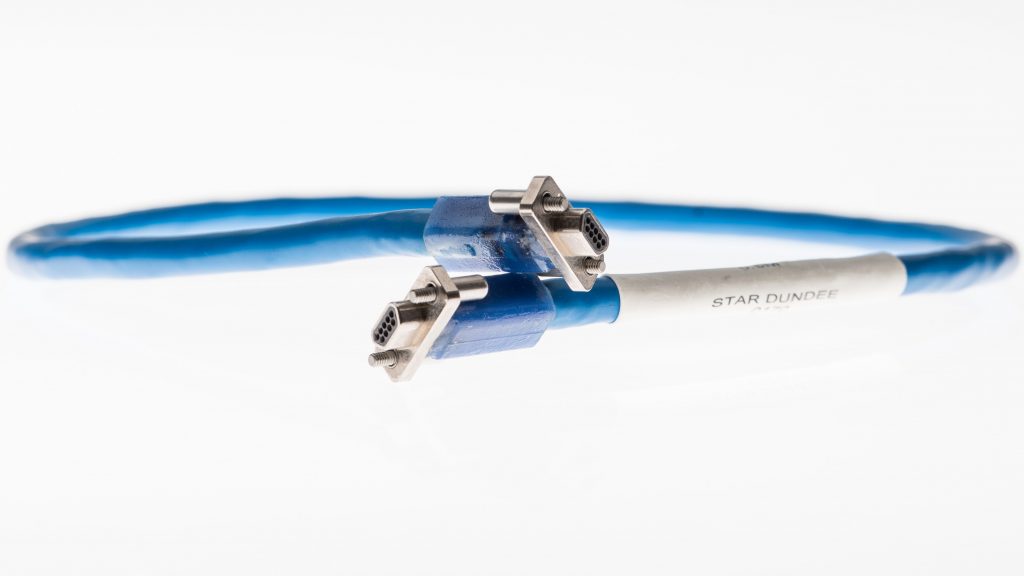 We have been providing Type A cables on request for some time, but we’ve now added the option to select either Type A or Type AL cable assemblies when requesting a quotation for SpaceWire Lab Cables and we will be holding stock of both types of cables. If you’re unsure of which type to order, please get in contact and we’ll be happy to answer any questions. 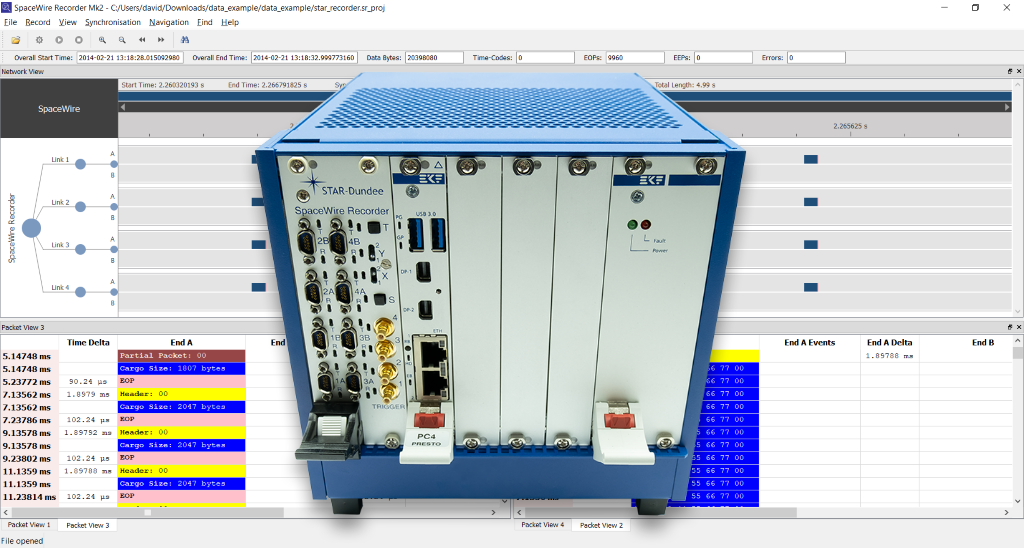 In order to validate and debug complete SpaceWire systems it is very useful to be able to record and view the traffic on multiple links. Thorough validation can also require very large quantities of SpaceWire traffic to be stored and analysed.

The SpaceWire Recorder Mk2 can record and display the SpaceWire traffic on up to four SpaceWire links. It records SpaceWire packets, time-codes and link errors to solid-state disk, along with time information, and then displays these in network and packet level views ready to be inspected. The quantity of data that can be recorded and viewed is limited only by the size of the solid-state disks used (960 GB).

Recording statistics provide a summary of recording contents and help highlight any concerns. Built-in search helps to validate and navigate recorded traffic. To help automate SpaceWire traffic validation, all or part of a recording can be exported to CSV formatted files and then easily interpreted by custom software.

More information about the SpaceWire Recorder Mk2 is available on the product page. 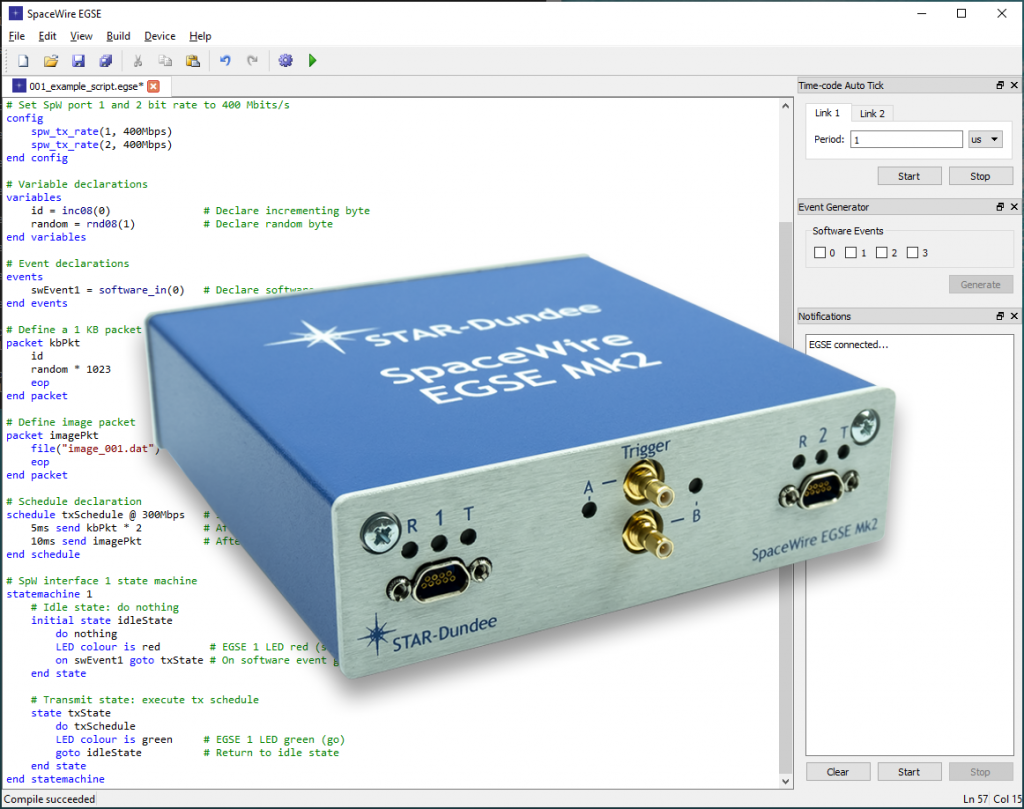 Essential for validating and debugging a SpaceWire link, our latest model of the SpaceWire Link Analyser is now available!

The Link Analyser Mk3 can capture and display bi-directional traffic travelling over a link; it can display live link statistics; and it can output decoded SpaceWire link characters and events to an external logic analyser. The traffic visibility this provides greatly helps to validate a link is operating correctly and aids debugging when problems are detected. Without such traffic visibility, there is an increased risk that issues go undetected and problems may take significantly longer to resolve.

Building on the capabilities of previous models, both the Link Analyser hardware and software are significantly improved. Hardware improvements mean much larger quantities of traffic can be captured, on SpaceWire links operating at faster speeds, and can be uploaded to a host PC more quickly. The software has been completely rewritten, retaining familiar views and useful functionality from the Mk2, whilst removing limitations of the previous software and adding new features. 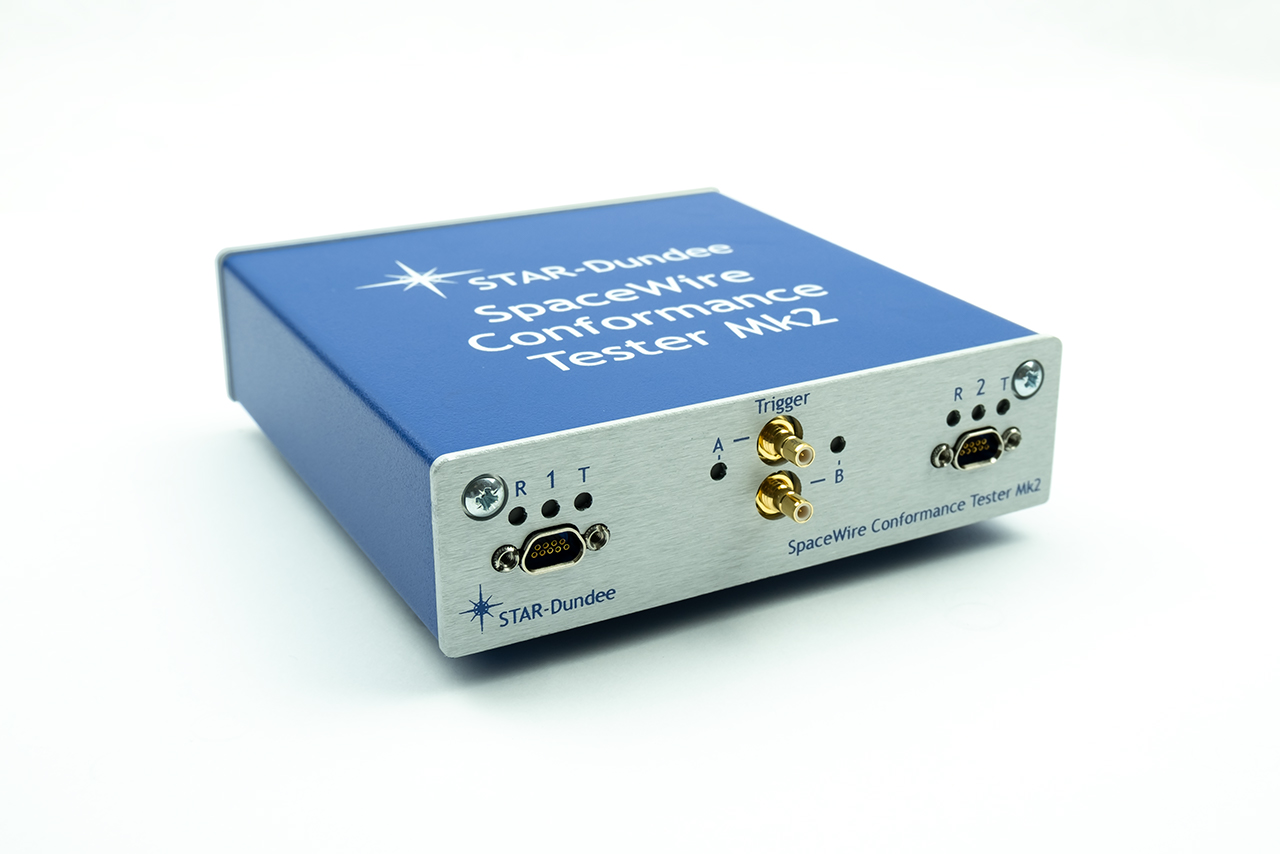 We are pleased to announce the availability of our all new SpaceWire Conformance Tester Mk2.

Building on the success of the original SpaceWire Conformance Tester, the Mk2 has a brand-new hardware design that connects to the computer over a USB 3.0 (or USB 2.0) connection. It is now rack mountable using our rack mounting kit. The Conformance Tester Mk2 supports testing of SpaceWire link speeds of up to 400 Mbit/s and comes with the newest version of the GUI software. 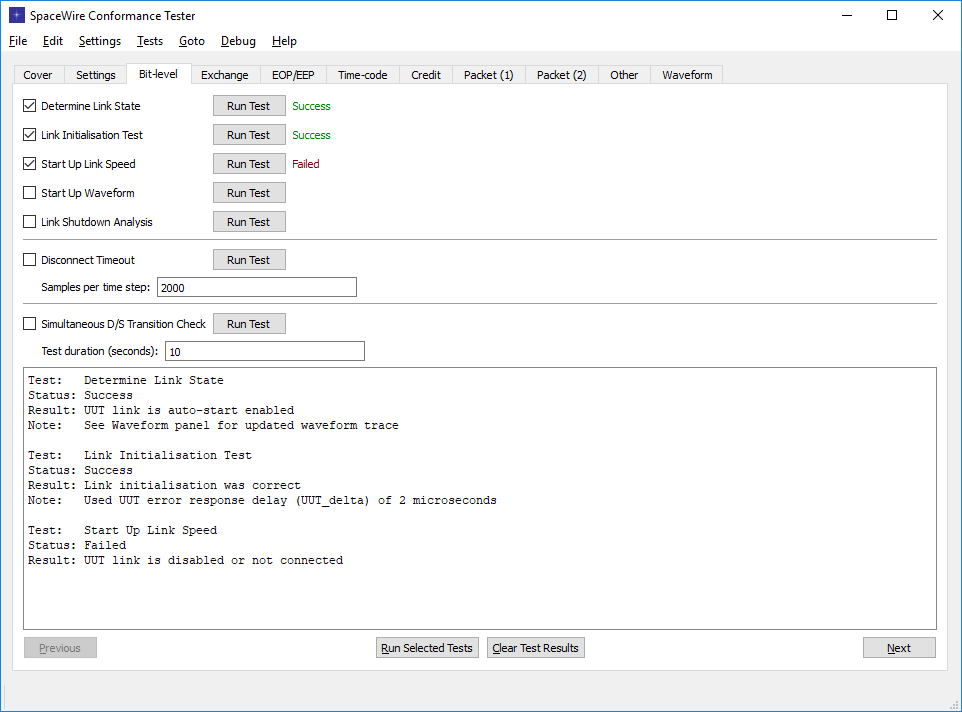 STAR-Dundee and Alpha Data have recently demonstrated compatibility between our FMC SpaceWire/SpaceFibre board and the Alpha Data ADA-SDEV-KIT. The Alpha Data ADA-SDEV-KIT is the principal prototyping platform for designs targeting the Xilinx Space Grade Ultrascale™ part, the XQRKU060. This new FPGA allows deployment of Space Based Reconfigurable solutions more than five times the performance of previous generations, and has significantly higher performance transceivers that can support the highest SpaceFibre data rate of 6.25 Gbit/s per lane. The STAR-Dundee FMC SpaceWire/SpaceFibre board provides the perfect development platform for customers wishing to test and develop SpaceWire and SpaceFibre solutions with our SpaceWire and SpaceFibre VHDL IP cores.

More information about the FMC SpaceWire/SpaceFibre board and the SpaceWire and SpaceFibre IP cores is available on the Products section of our website.

Closely following on from the publication of the SpaceFibre standard, our latest SpaceFibre and SpaceWire enabled test and development unit is now available!

Previous versions of the STAR Fire were created whilst we developed the SpaceFibre standard, helping to prove the technology and providing early adopters with access to test equipment. Building on the previous STAR Fire models and our expertise in SpaceFibre, both the STAR Fire Mk3 hardware and software have been significantly improved, resulting in a comprehensive test and development platform. 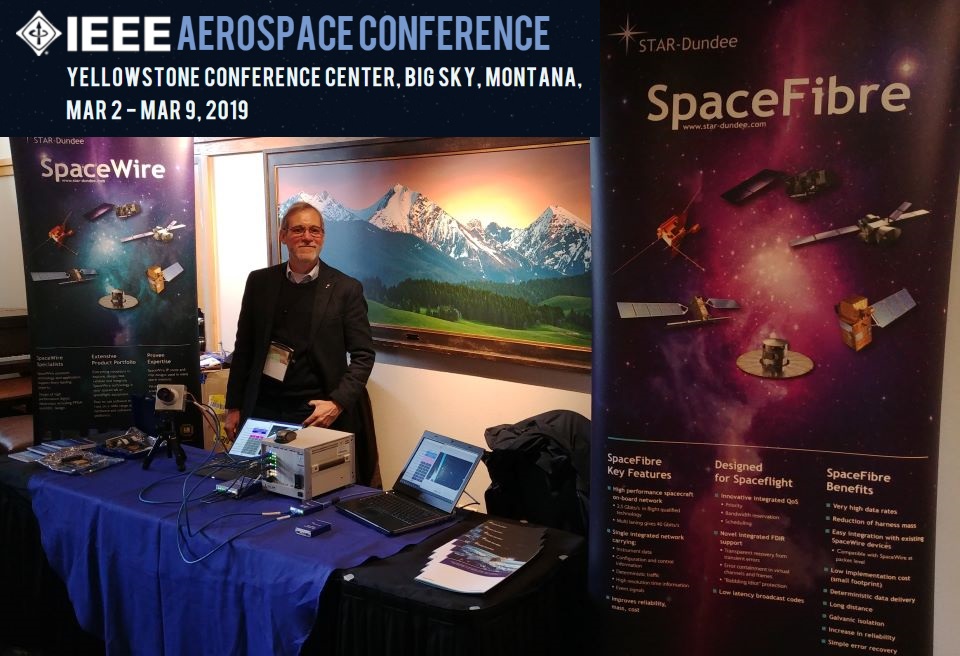 Other events where you can meet our team this year and see these great demos include: 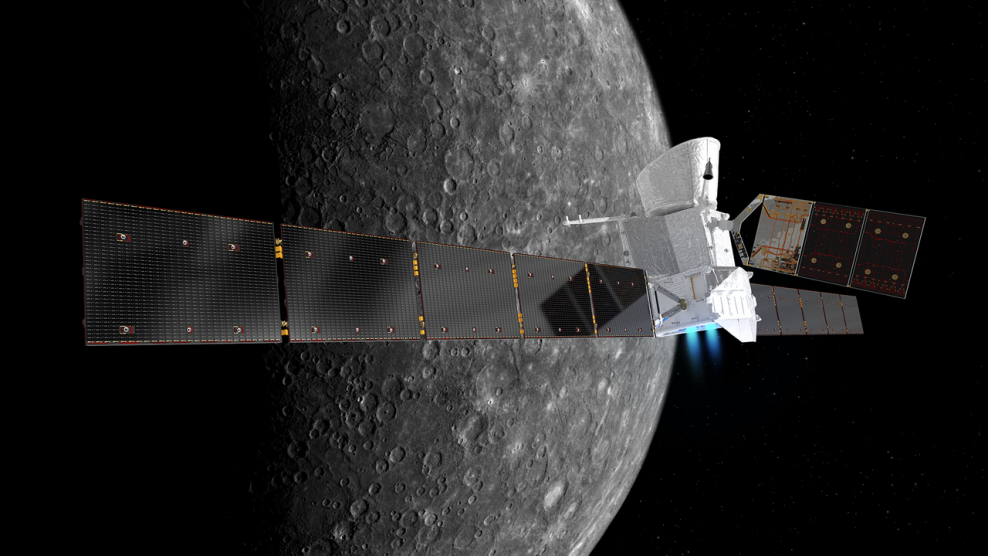 From the 6th to the 9th of August, STAR-Dundee will be exhibiting at the 32nd Annual Small Satellite Conference in Logan, Utah, USA. If you’re attending the event, come and visit us at Booth 31 in the main hall (Taggart Student Center).

We’ll be demonstrating some of our forthcoming products, including the Link Analyser Mk3, STAR Fire Mk3 and SpaceWire Gigabit Ethernet (GbE Brick). Also on our stand will be our SpaceFibre Camera, which will be transferring video across SpaceFibre at Gbit/s rates to the STAR Fire Mk3, where it will be displayed on the connected PC using our STAR-System software suite.