The remote memory access protocol (RMAP) provides a means for one SpaceWire node to write to and read from memory inside another SpaceWire node. The aim of the RMAP protocol is to standardize the way in which SpaceWire units are configured and to provide a low-level mechanism for the transfer of data between two SpaceWire nodes. For example RMAP may be used to configure a camera or a mass memory device. The camera device may then write image data to allocated areas of memory in the mass memory, or the mass memory may read image data from the camera. All read and write operations defined in the RMAP protocol are posted operations i.e. the source does not wait for an acknowledgement or reply to be received. This means that many reads and writes can be outstanding at any time. 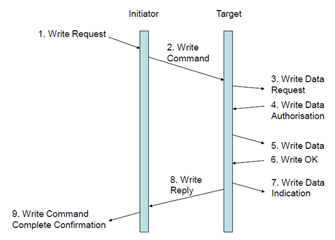 The write command writes zero or more bytes of data into a specified area of memory in a target SpaceWire node. Registers are memory mapped. An acknowledgement may be returned in an optional reply packet.

The write command provides a means for one node, the initiator node, to write one or more bytes of data into memory of another node, the target node on a SpaceWire network. The operation of the write command is illustrated.

The read command reads one or more bytes of data from a specified area of memory in a target SpaceWire node. The data read is returned in a reply packet.

Read-Modify-Write Command
The read-modify-write command reads a register (or memory) returning its value and then writes a new value, specified in the command, to the register. A mask can be included in the command which can be used to provide an atomic operation for semaphores and other handshaking applications.