The architecture of the SpaceWire router ASIC is illustrated in Figure 57. 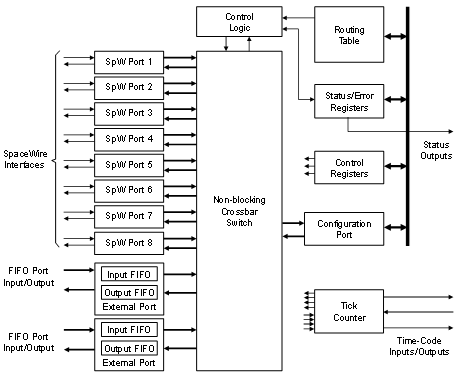 The SpaceWire ports are compliant with the SpaceWire standard providing high-speed, bi-directional communications. The FIFO ports each comprise an input FIFO and an output FIFO and can receive and send data characters and end of packet markers. A time-code port is also provided along with a time-counter to facilitate the propagation of time-codes, see the section “Time-Codes“. When a valid time-code arrives at a router port it is sent out of all the other SpaceWire ports and a TICK_OUT signal is generated at the time-code port. The router can operate as a time-code master using the TICK_IN provided in the time-code port.

The SpW-10X was designed by the University of Dundee, transferred to radiation hard technology by Austrian Aerospace, and is manufactured by Atmel and sold as the AT7910E device. It is packaged in a space qualified 256 pin QFP package, see Figure 58. 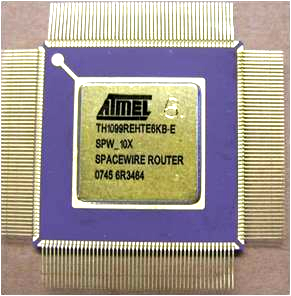