The Lunar Reconnaissance Orbiter (LRO) is a NASA mission currently in orbit around the moon returning images and other scientific data about the lunar surface, see Figure 15. 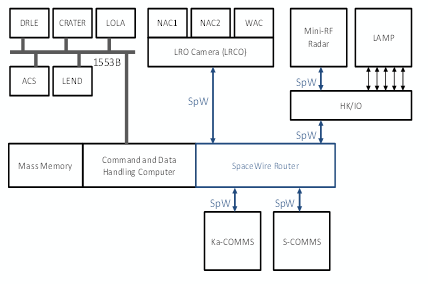 SpaceWire is used to connect the LRO Cameras (Narrow angle Cameras, NAC1 and NAC2, and Wide Angle Camera, WAC), and Mini-RF radar instrument, to the Command and Data-handling (C&DH) system. SpaceWire is also used to pass data from the Command and Data-handling system to the Ka and S-Band communications systems. Information from the Lyman-Alpha Mapping Project (LAMP) instrument is passed into an I/O board in the C&DH system (HK/IO) and then sent over SpaceWire to the C&DH computer/mass memory. The C&DH computer includes a 4-port SpaceWire router for handling the SpaceWire communications.

An example image from LRO is given in Figure 17. It shows the Apollo 12 landing site. The Apollo 12 (Intrepid) descent stage is clearly visible in the image as is the earlier Surveyor 3 spacecraft. The black lines radiating out from Intrepid and pointed to by arrows in other parts of this image are the footsteps of the Apollo 12 astronauts. This image travelled over SpaceWire twice: from the NAC to the mass memory and from the mass memory to the downlink communication system. 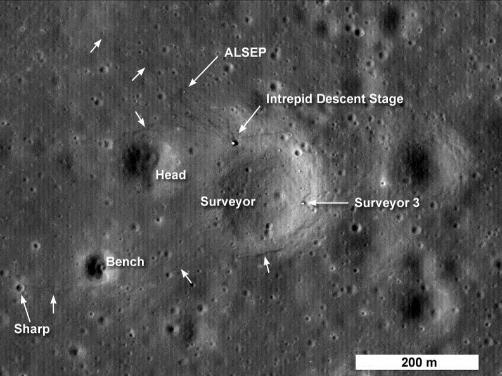