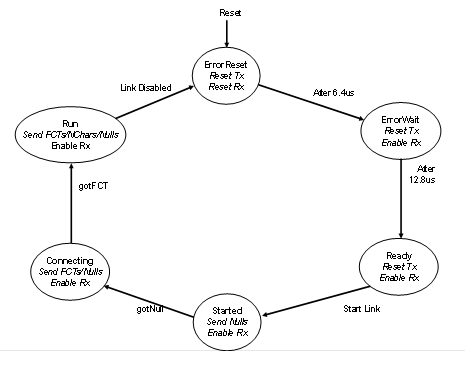 If the other end of the link (End B) is not ready and does not send Nulls and FCTs when expected, End A will wait in the Started or Connecting state for 12.8 µs and then give up waiting, move back to the ErrorReset state and try again to make a connection. This is illustrated in Figure 38. 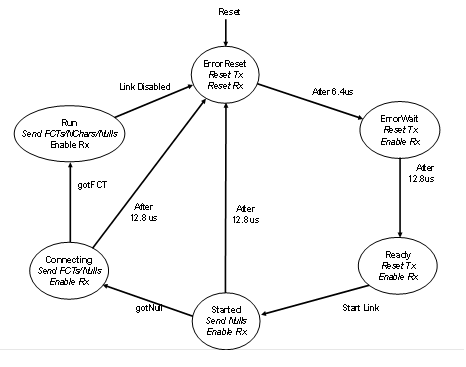 To avoid having to set both the Start Link bit in both ends of the link to start a link, an Auto-Start mode is included in the SpaceWire state-machine. A SpaceWire interface in the Auto-Start mode will automatically start up when it receives a bit (gotBit) on its receiver. This functionality is achieved by adding an extra condition on the transition between the Ready and Started states. This addition is illustrated in Figure 39. 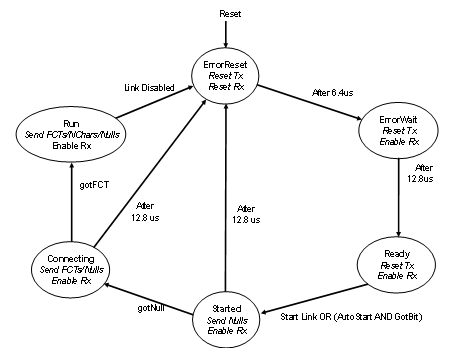 One end of the link (End B) has its AutoStart control bit set and has reset, moved through ErrorReset and ErrorWait, and is now sitting in the Ready state. The other end of the link (End A) the link has also reset and is waiting in the Ready state. When End A gets the command to Start Link, it moves to the Started state and begins sending Nulls. End B receives the start of the Null and gotBit is asserted causing it to also move to the Started state. The Null/FCT handshake now takes place with both ends moving through Started and Connecting to Run.

When one end of the link is trying to make a connection, i.e. Start Link is asserted, and the other end of the link (End B) is not ready to make a connection for whatever reason, End A will send Nulls for 12.8 µs and then go silent for 19.2 µs (6.4 µs + 12.8 µs) repeatedly. Observing bursts of Nulls from one end of a link while nothing is being sent in the other direction is a clear indication that one end is trying to send and the other end is not responding. This could be because that end of the link does not have its Auto-Start control bit asserted, or alternatively its Disable bit is asserted.

The link initialisation sequence is shown in Figure 40. The sequence of characters under A->B Event is for one direction of the link (characters being sent from End A to End B) while that under B->A Event is the other direction. 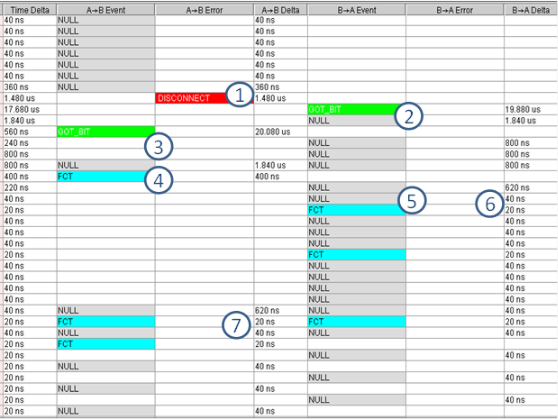 Note that during initialisation at least one Null must be sent before FCTs are sent, although this is not clearly stated in the SpaceWire standard.

If there is noise on the input to a receiver, possibly caused by the cable being disconnected, the random noise might occasionally correspond to a Null followed by an FCT. If the receiver is in auto-start mode, this will cause the receiver to start up and begin sending Nulls and FCTs. Eventually the noise will cause a parity error and a disconnect. If a SpaceWire interface is observed to periodically send short bursts of characters, it is likely that the cause is noise on its receiver inputs. To some extent unwanted noise can be overcome using biasing resistors on the receiver inputs.