A SpaceWire router enables more sophisticated architectures to be implemented when required. A basic router-based architecture is illustrated in Figure 8.

The advantages of this type of architecture are:

Figure 9 Blocking in a Router

There are several ways to avoid this situation. If the required total data rate from the two instruments is larger than can be provided by a single SpaceWire link then a second link is required between the router and memory, possibly using group adaptive routing, which will provide graceful degradation in the event of a failure of one link. If the total data rate from the two instruments is less than the data rate of a single SpaceWire link then the router can act as a concentrator permitting a packet from say instrument 1 first, followed by a packet from instrument 2. In this case the amount of data buffering in the instruments will depend upon the size of the packets being sent. Hence, it makes sense to use short packets rather than long ones to reduce the amount of buffer memory required. Another alternative is for the memory (or processor) to control when an instrument is allowed to send data. For example, the memory could request data from instrument 1 and once this has been received it could request data from instrument 2. There are many possibilities: SpaceWire is flexible enough to support the requirements of different types of mission.

It should be noted that since the router uses wormhole routing and does not support packet buffering in the router, the speed of all the SpaceWire links attached to a router should normally all be set to the same rate.

Typical applications for this type of architecture include payload data-handling systems with more than one instrument or multiple possible destinations for data from an instrument. The potential single point failure of the router can be avoided by including a second router connected to all the units.

Figure 10 shows a prime and redundant pair of routers which have been included in prime and redundant data handling units together with the mass memory and processing units. This provides router redundancy while reducing the lengths (and hence mass) of the SpaceWire links. 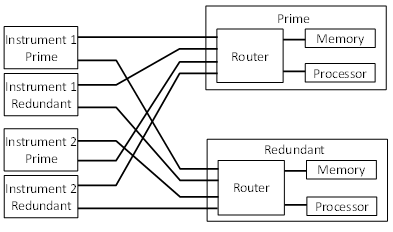 The advantages of this type of architecture are:

This type of architecture is ideal when a redundant data handling system is required.