ExoMars is an ESA mission to Mars that incorporates a versatile rover. The ExoMars rover will carry a comprehensive array of scientific instruments dedicated to exobiology and geology research. The Rover will travel several kilometres searching for traces of past and present signs of life, collecting and analysing samples from within surface rocks and from the subsurface, down to a depth of 2 metres. 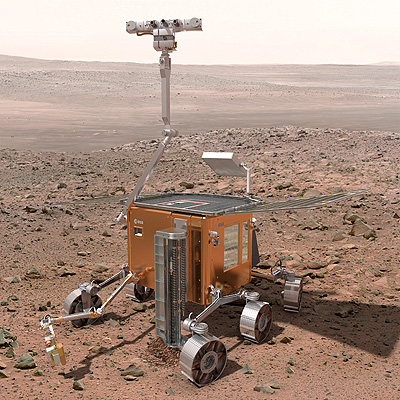 The SpaceWire data-handling architecture used on ExoMars is illustrated in Figure 14. It follows closely the example architecture of Figure 1. 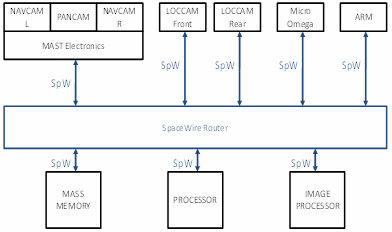 ExoMars carries several cameras to support navigation: PanCam providing a panoramic view around the rover, NavCams used to provide stereoscopic images from which DEMs can be derived and used for navigation purposes, and LocCams used to measure the motion of the rover relative to the surface. The processing of this image data is quite intensive so a dedicated image processing chip is used to support the processing. SpaceWire is used to transfer images from the cameras to mass memory and from there to the processor and image processing chip. A SpaceWire router is used to interconnect the various SpaceWire units. The instrument arm and the Pasteur instrument are also connected to the data-handling system using SpaceWire.

ExoMars makes extensive use of the RMAP protocol for passing data from cameras, to mass memory and to/from the processor and image processing chip.