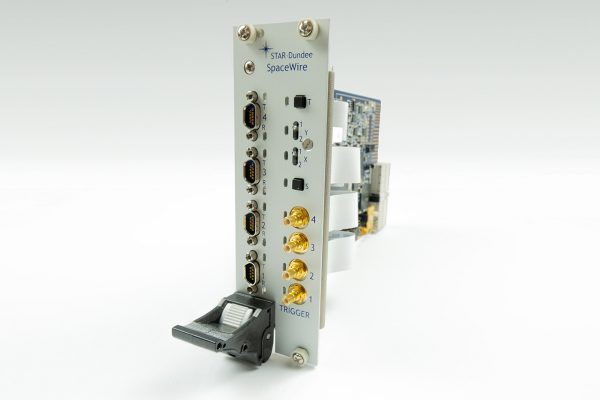 The SpaceWire PXI Mk2 card is a versatile SpaceWire Interface, Router or RMAP Target device. The card is designed to be an efficient host interface to a SpaceWire system or network, by utilising a cPCI or PXI backplane.

The SpaceWire PXI Mk2 provides four or twelve SpaceWire interfaces, support for high speed data transfer, the capability to inject various types of errors on demand, the ability to transmit and receive time-codes and act as a time-code master, and comes complete with highly optimised host software for low latency transmission of SpaceWire packets directly to and from the host PC.

The 8HP SpaceWire PXI Mk2 Interface and Interface with RMAP Target cards can take advantage of the trigger connections on the front panel to sequence events in the card such as the transmission of time-codes or data packets. The four general purpose SMB trigger connectors can also be used to indicate events to an external device such as an oscilloscope.

The RMAP Target card has an option to directly connect up to four configurable RMAP targets to the SpaceWire interfaces to allow the card to act as a test card for remote memory transfers. Each RMAP target can be controlled and configured independently, and has access of up to 1 GB of on board DDR3 memory.

The SpaceWire PXI Mk2 cards are supported by STAR-Dundee’s software stack, STAR-System, providing a consistent programming interface for accessing all STAR-Dundee’s most recent, and future, router and interface devices.