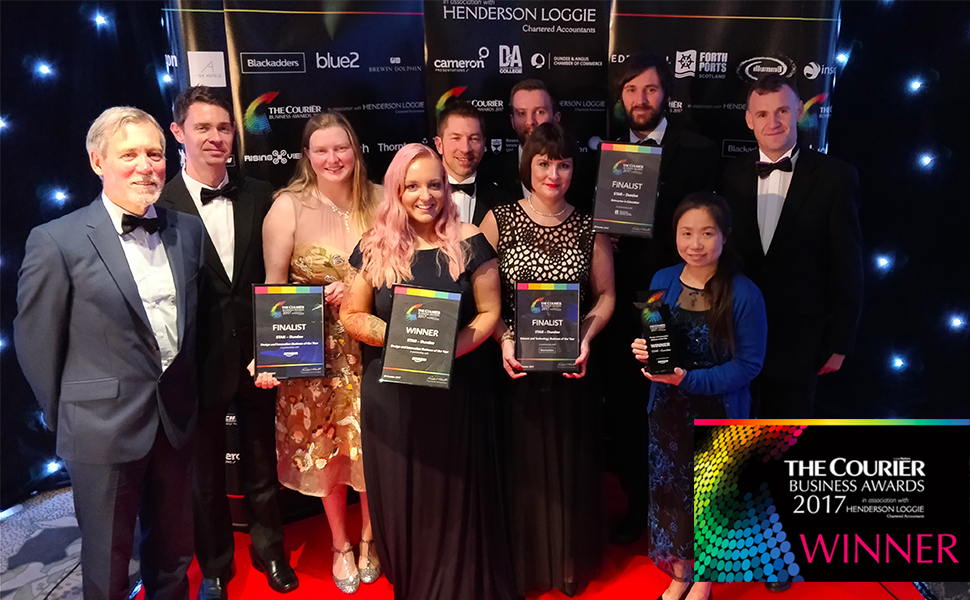 Saturday night saw some of Tayside and Fife’s top business talent all in one marquee for the Courier Business Awards 2017.

We had reason to celebrate right from the beginning as the Design and Innovation Business of the Year was one of the first to be announced and we were delighted to find out that we had won!

We would also like to congratulate another spinout from the University of Dundee My Diabetes My Way for winning the Enterprise in Education award which was sponsored by Dundee Research and Innovation Services.

The evening highlighted the amazing business community right here in Dundee, which STAR-Dundee is proud to be part of. Having recently transitioned to an employee owned company STAR-Dundee has secured it’s future in the City.

A huge congratulations to all of the finalists and winners. See The Courier today to read more about the evening.

You can also see our tweets from the event here: @STAR_Dundee 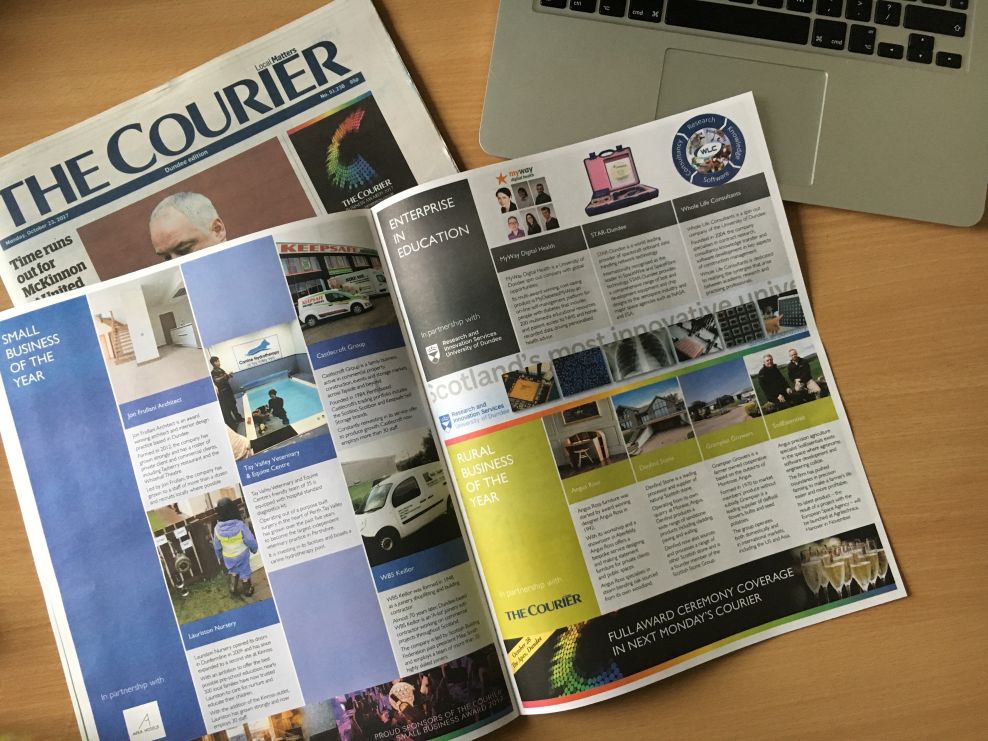 STAR-Dundee has recently transitioned to an employee owned company and our story has been shared far and wide by the press including local and national newspapers and websites. The Courier highlighted STAR-Dundee’s move to employee ownership in securing our future in Dundee and The Herald wrote ‘To boldly go: Dundee space tech firm moves into staff ownership’.

While the University of Dundee’s School of Science and Engineering and Centre for Entrepreneurship wrote stories on the transition, as well as the Research and Innovation Services sharing the news on social media.

Our new employee owned status means we are now proud members of Employee Ownership Association who also shared our story on their news page.

If there are any features that we have missed please let us know by emailing Lucy.Robertson@star-dundee.com and we can add them in as soon as possible.

On the 24-26th of October 2017, STAR-Dundee are attending Space Tech Expo Europe in Bremen, Germany.

We will also be tweeting from @STAR_Dundee, follow us there for updates.

Images from left to right: STAR-Dundee employee-owners outside STAR House | Steve Parkes, former CEO, back in the lab as CTO with the new SpaceFibre equipment | Employee Ownership Association Proud to be a member badge |

STAR-Dundee is now proudly employee owned and part of the Employee Ownership Association.

STAR-Dundee is an aerospace engineering company which designs electronic components and test equipment for spacecraft. Operating from a beautiful townhouse close to the University of Dundee from which the company spun out in 2002, STAR-Dundee provides the international space agencies and space industry with important equipment. Technology that originated in Dundee is now being used across the world on more than one hundred spacecraft which are monitoring the Earth, exploring nearby planets and asteroids, mapping our galaxy and sensing the further flung parts of our solar system. The ‘SpaceWire’ network technology interconnects sensors and electronic equipment onboard a spacecraft, providing an efficient and versatile means of integrating the equipment together. This is similar to the way in which USB connects peripheral devices to a laptop.

Originating primarily because several organisations wanted to use technology developed by the University of Dundee, STAR-Dundee has grown from an academic and a few enthusiastic research students, who initially worked in their spare time to design and develop the first products. The company now employs 25 people and has offices in both Dundee and Barcelona. STAR-Dundee focuses on what it is good at, the design of electronic equipment and related software, and sub-contracts appropriately skilled manufacturing partners in the UK.

After celebrating our fifteenth year in business this year, and to secure the long-term future for the company, STAR-Dundee was transformed from a company run and majority owned by the founding academic, Prof Steve Parkes, to an employee owned company. Facilitated by a succession planning project initiative by Scottish Enterprise, various options were considered for the company and it soon became clear that employee ownership was the way forward for a company like STAR-Dundee.

Prof Steve Parkes said: “Having formed STAR-Dundee and forged it over 15 years into a company with a worldwide reputation, I realised that I was not going to be around to see it through the next 15 years. It became clear that the future for the company was about the people in the company that had helped make it a success and the culture that we had developed to support that success. Selling the company to another organisation, which would inevitably change the culture and might even move it from its Dundee base, was not a very attractive idea. Employee ownership retains and strengthens the culture and will ensure that it always has a base in Dundee.”

Our management team has been restructured with former CEO Steve Parkes now focusing on technology development as Chief Technology Officer, and Stuart Mills, another company founder and previously Chief Operating Officer, becoming CEO. Carole Carrie, the Administration Manager, is now Company Secretary. These management changes are intended to provide a firm foundation for further growth of the company.

Stuart Mills, STAR-Dundee’s new CEO, said: “STAR-Dundee has been a great success because of its people.  Our move to employee ownership allows these individuals to have a greater say in the running of the company and to further benefit from the company’s success.”

Sarah Deas, director at Co-operative Development Scotland, the arm of Scottish Enterprise that supports company growth through collaborative and employee ownership business models, added: “STAR-Dundee’s main priorities when considering its succession options were to secure and strengthen the business, both in terms of its culture and success, and also to ensure the business remains rooted in Dundee. All of these objectives have been achieved through employee ownership as well as making sure the staff all have a meaningful stake in their company and its future success.”

Diane Taylor, Director of Research and Innovation Services at the University of Dundee, said: “STAR-Dundee is a prime example of innovation in University research making a real impact beyond academia. We would like to congratulate the whole STAR-Dundee team, and wish them every success for the future.”

If you would like a copy of our full press release about our transition to employee ownership to include on your website or in your publication please email: Lucy.Robertson@STAR-Dundee.com 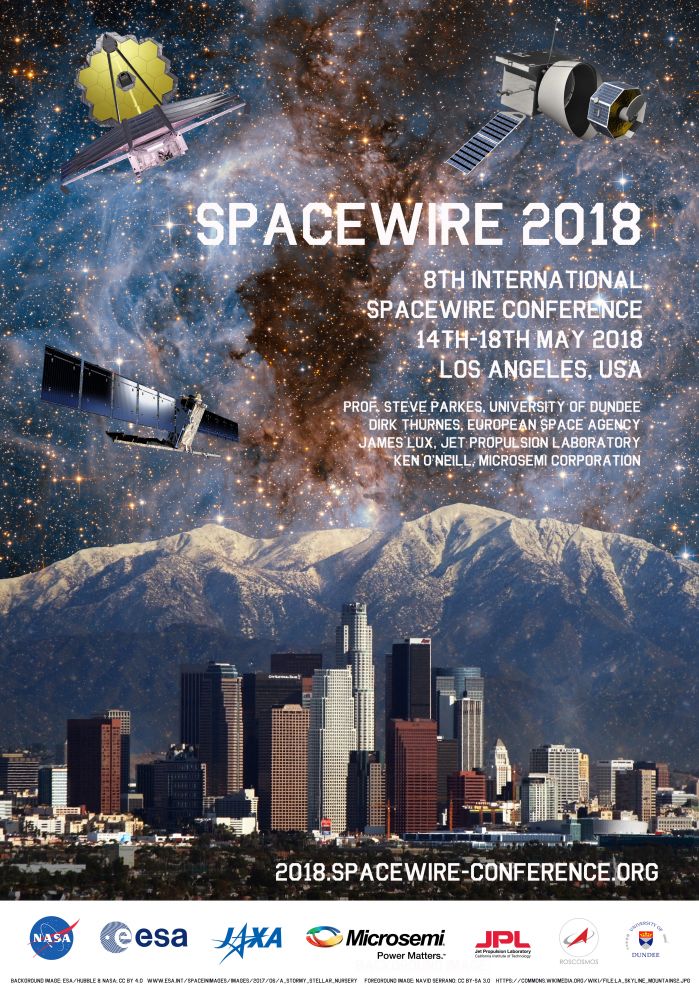 The 8th International SpaceWire Conference will take place in Los Angeles, USA from 14th-18th of May 2018.

The conference aims to bring together product designers, hardware engineers, software engineers, system developers and mission specialists interested in and working with SpaceWire and SpaceFibre to share their latest ideas and developments. The conference is for both academics and industrialists and will be attended by representatives from industry and the major space agencies.

The technical programme will include sessions dedicated to the below topics:

The call for papers is open and the deadline for abstracts is the 28th of October.
More information on this here: 2018.spacewire-conference.org/call-for-papers

Interested in being an exhibitor at the conference?
Find out more information here: 2018.spacewire-conference.org/exhibitor-information

The proceedings of the 2016 SpaceWire conference held in Yokahama, Japan can be seen here: 2016.spacewire-conference.org/proceedings